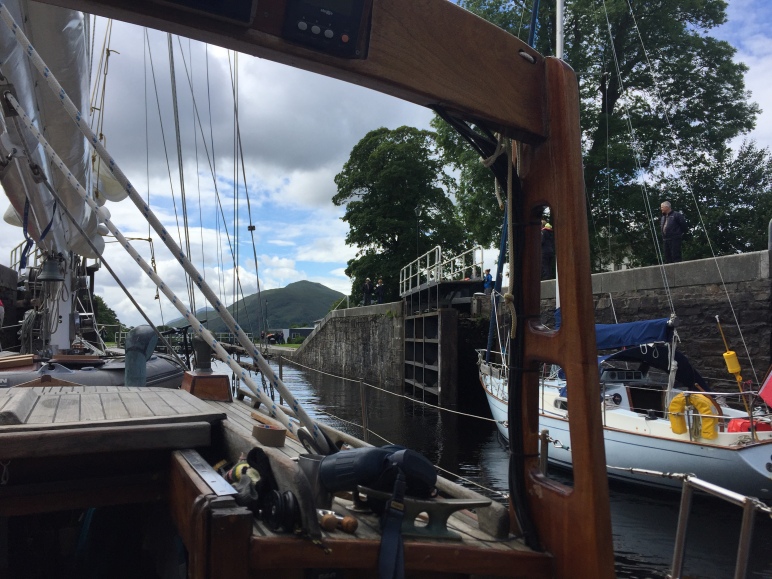 With a strengthened bond from conquering the north sea together, Micha and I finally enjoyed a relaxing few days sailing slowly up the north coast of England, visiting parts of my country which were new to me. After the stress of the past few months, it was important that we had this time together. It felt like we’d turned a corner in our relationship, perhaps one of deeper understanding of each other, the situation and what it was going to require of ourselves to make this work for the next 3 years.

We picked up our first crew in Edinburgh and set off up to Inverness to start the Caledonian Canal. The crew were a group of friends which meant they naturally worked well together plus many of them had sailed with the boat before and thus knew how things worked and where to find things, which is one of the easiest situations for us.

From my experience germans live up to their reputation of being organised, and this group was no exception, having preplanned most of their meals beforehand, bringing with them the necessary ingredients from spices to a giant leg of pork. They even brought their instruments along and tones of an accordion or harmonica could often be heard wafting through the cabins. It was a relaxed trip, with giggling first thing in the morning as brave crew members jumped into the water on a cold and grey Scottish morning or late into the night surrounded by open whisky bottles.

The Caledonian Canal itself is 60miles long and involves 29 locks and 4 Lochs which take you from Inverness on the east coast of Scotland to Fort William on the west. The canal gates opened setting Panta free to wind her way through the Great Glen, where she felt at home in the rugged landscape, roaming amongst the rolling green giants which rose out of the Scottish mist on either side, making her feel small by comparison – even though Pantagruel of François Rabelais is himself a giant!

There were narrow stretches with lush tall trees sheltering us from either side, which linked together the wide lochs which left us exposed to fully embrace the atmosphere of the highlands in bracing 20knot head winds, until we arrived at the next set of black and white gates where a grinning lock keeper would appear with outstretched hands ready to take our lines.